My name is BaBa Mwalimu Kwasi-Quayaja AMSATA and I am the Coordinator for the Pan African Federalist Movement (PAFM) in North America and the Author of: “The New Pan Africanism 2020”.

I am honored to have been asked to do the Keynote Address for this year’s International MLK Day of Service. Last Friday, January 15, 2021, marked the 92nd Anniversary of the birth of the Rev. Dr. Martin Luther King, Jr.  He was born on January 15, 1929, and he transitioned on April 4, 1968.  I remember, being a 20-year-old student activist at Syracuse University doing work-study duty in Kimmel Dormitory on April 4, 1968, when I first learned that Dr. King had just been assassinated. He was 39. The relatively young ages of Dr. King and myself in 1968, 39 and 20 respectively, speak to the central and critical role of young people in the struggle for the liberation and political unification of African people.

In the same vein, it is worthwhile to note that Marcus Garvey was only 32 when his organization convened the First Convention of African Peoples of the World, one-hundred years ago. This gathering assembled 25,000 Black people from 40 different countries for the entire month of August 1920, elected the 1st Provisional President of Africa, and created the Red/Black/Green Pan African Flag. And again, Garvey was only 32, at the time of this historic and consequential African Global Convention, in August 1920, and King was only 34, in August 1963, when he gave his most famous speech at the historic March on Washington in which he sought to cash a “promissory note” to African people, from the “Bank of Justice”, that had come back marked “insufficient funds”.

From the very beginning, Dr. King saw his role as that of “Drum Major” in the universal struggle for freedom for all people of African ancestry.  Just three (3) months after King had won his first victory in the year-long Montgomery Boycott, in December 1956, he found himself in West Africa at the independence celebration of Ghana on March 6, 1957. While there, Dr. King met with Dr. Kwame Nkrumah who became Ghana’s first Prime Minister (1957) and President (1960) and the most consequential Pan African Federalist in the 2nd half of the 20th Century. And as Dr. King observed the old Union Jack flag of England coming down and the new beautiful multi-colored flag of Ghana going up, he turned to   Congressman Adam Clayton Powell, Jr. from Harlem on his right, and Dr. Ralph Bunch, the first Black Nobel Peace Prize winner on his left, and said:  “That old flag coming down represents an old order passing away and that new flag going up represents a new order coming in”.

Dr. King was very moved by his experience in Ghana and spoke of it often, most notably at his own Ebenezer Baptist Church, immediately upon his return, in a sermon entitled “Birth of a Nation” and later in a famous speech to a wider audience entitled “Remaining Awake through a Great Revolution”.  Dr. King always put Ghana’s independence in Africa in the context of the freedom struggle of Black people in America. He saw strong connectivity between the black freedom struggles, of African people, on both sides of the Atlantic.

In an essay entitled “The Time for Freedom has Come” written for the New York Times Magazine on September 29, 1961, Dr. King noted, and I quote  “Many of the students, when pressed to express their inner feelings, identify themselves with students in Africa…..The liberation struggle in Africa has been the greatest single international influence on African- American students. Frequently I hear them say that if their brothers and sisters in Africa can break the bonds of colonization surely Black people in America can break Jim Crow. African leaders such as Nkrumah of Ghana, Azkiwe of Nigeria, and Tom Mboya of Kenya are popular heroes on most Black college campuses. Many groups demonstrated and  protested when the Congo leader, Patrice Lumumba was assassinated……Part of the impatience of Black youth stems from their observations that change is taking place rapidly in Africa and other parts of the world, but comparatively slow in the South”

And the “new order” that Dr. King spoke of, on the 6th of March 1957 in Ghana, reached its zenith 37 years later with the swearing-in of Nelson Mandela as the first Black President of South Africa, on May 11, 1994.

Dr. King paid his respects to another Pan African freedom fighter, the aforementioned Marcus Garvey, during a trip to Jamaica with his wife, on June 20, 1965.  While there they laid a wreath at the shrine, where Garvey’s body had been re-entombed. In so doing, Dr. King said, and I quote:  “Marcus Garvey was the first man of color in the history of the United States to lead and develop a mass movement. He was the first man, on a mass scale and level, to give millions of Black people a sense of dignity, destiny and somebodiness.” 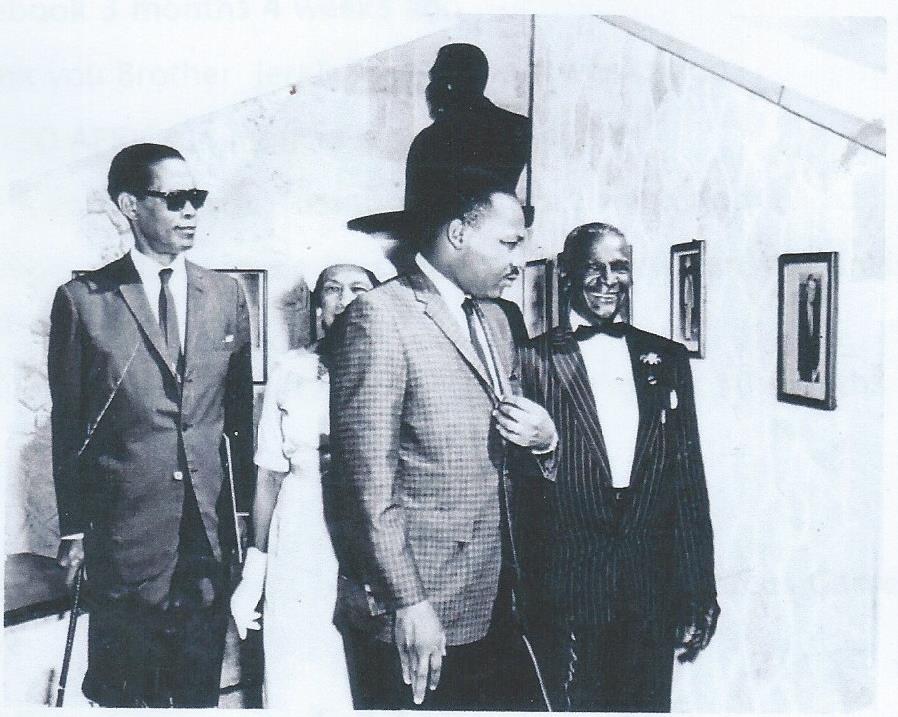 I believe that if Dr. King had survived his assassination attempt in 1968, he probably would have spent some time in Apartheid South Africa, in the 1970s and 80s, working with Bishop Tutu, the African National Congress (ANC), Pan African Congress (PAC) and other indigenous organizations & movements, in the struggle to free Nelson Mandela and secure freedom and democracy for Black people in South Africa, through non-violence.  Through these efforts, we may very well have seen Mandela freed and elected the first Black President of South Africa, a decade earlier, in the 1980s.

It is ironic that the first year that the 3rd Monday in January was designated as an annual federal holiday in King’s honor, January 20th, 1986, was the same year that a mass movement of Black people, in the streets of America, led to the United States Senate overriding President Reagan’s veto of sanctions against South Africa on October 2nd, 1986.  This was done by a vote of 78-21 which was 11 votes more than the 2/3 required to override a presidential veto.   That’s how we roll. Contrast our effective and dignified exercise of what Dr. King would say is “the right to protest for right” with that of unruly, unpatriotic, insurrectionist action of the white supremacist in Washington DC two weeks ago.  But let’s not get distracted.

On that historic day in Washington, August 28, 1963, when Martin Luther King ended his visionary speech by saying “that will be the day when we will be able to say in the words of that old Negro spiritual “Free at last, free at last , Great God almighty we are free at last” perhaps Dr. King was looking forward to the historic day, exactly 45 years in the future, on August 28, 2008, in Denver Colorado, when a Blackman’s fist-bumped his wife, who was a direct descendant of enslaved Africans and then went before a record-breaking crowd of 84, 000 people, to become the first person of African ancestry to accept the nomination of his Party for President of the United States. Or perhaps in that final speech that Dr. King gave on April 3, 1968, when he said “I may not get there with you but I know that we, as a people,  will get to the Promise Land”… he was envisioning that auspicious occasion, 48 hours from now, when a Black woman who like himself graduated from a historical Black University, Howard and Morehouse respectively, will raise her hand and take the oath of office as Vice-President of the United States, becoming the first woman in American history to do so.

But I believe that Dr. King envisioned something much bigger than either of these two (2) epic events.… When he said, in that fateful and final speech, one day before his passing, that “God has allowed me to go up to the mountain top.  And, I looked over. And I’ve seen the Promise Land”, I believe, at that moment, Dr. King became conscious of the mission of the Pan African Federalist Movement (PAFM) “To bring the United African States into political existence”  forty-seven (47) years before the Movement itself came into being in 2015.

I believe he knew that the birth of the United African States would mark the reemergence of Africa as a World Power, that would be the master of its own destiny; able to manage the vast resources of Africa for the benefit of African people worldwide and fully capable of dealing with ALL of the global powers that be from a position of strength.

Accordingly, I believe that the realization of the Promise Land of Freedom that Martin Luther King, Jr. referenced, in his life-closing remarks, was a day in this decade (just a few years from now), when the recently elected Black United States Senator from Georgia, who is the Pastor of Dr. King’s own Ebenezer Baptist Church, stands with all of us, to bear witness, to the First President of the United African States raise HER hand to take the oath of office.  (PAUSE)

On this note… please allow me to end with the words of Dr. Kwame Nkrumah, who so profoundly influenced the young 28-year-old Dr. King during his visit to Ghana in 1957, “AFRICA MUST UNITE… [NOW! PERIOD. !!]”

And YES, “there may be some difficult days ahead’’ but make no mistake about it, “WE SHALL OVERCOME”

Welcome to this celebration of the International MLK Day of Service